I Think I Should Emcee the Oscars...

Was I alone in thinking that Jennifer Hudson's bra should have been one of the contenders in the Best Actor in a Supporting role category? I didn't think so. End of Oscar summary.

We celebrated our anniversary today with Chinese Food from our favorite restaurant (since we keep Kosher, the only Chinese restaurant in the area that we can eat meat from). This is Queens, NYC - can somebody please offer up a little competition? End of Kosher food rant.

But we were also celebrating something else - Julian read ten words from the board today! His reading skills are emerging and my heart just swells at the world opening for him. I spoke to his teacher earlier and then got off the phone and promptly called Scissors who was just as over the moon. Julian has learning difficulties with no diagnosis. Actually, he was diagnosed with global developmental delay as a tot, a little sensory integration thrown in with a smattering of auditory processing issues and there you have our perfect little puzzle - Julian. I sat with him last night reading something that was a little difficult for him, but he was scanning all over and picking out those sight words expertly. I felt tears forming as they're forming now.

It's amazing looking through the world of each of your children. Somehow Tali's world has always been a bit more straightforward as she has easily narrated the goings on from early on. Entrance to Julian's world sometimes requires a bit more of a roundabout journey, but I must say, always worth the diversions.

Julian's fortune from his cookie tonight was, "Some pursue happiness; you create it." End of kvelling over your children segment.

HAPPY ANNIVERSARY TO US

Scissors and I are married 12 years today. In that simple sentence is packed a lot of living. We've made a home together that is filled with love and laughter (and a pinch of angst and tears for good measure). We dream of winning the lottery, but rarely play mostly because we don't want to embarrass ourselves and say something like "we still can't hardly believe it." Winners seem to say things like that.

I really liked last year's Anniversary post, it makes me smile so I'm just linking to it. Now don't be lazy (like me), go on over and read about my SLIDING THEORY.

The song that follows is a favorite love song and I send it out to Scissors - A Heart Needs A Home by Richard and Linda Thompson. I'm glad that our hearts found theirs.

Ah, the halcyon days of Central Snark and my Saturday Spins. Yes, the wildly popular Saturday Spins where I would showcase a new artist each week and my NBFF, my kids and a friend of a friend would drop by to listen.

Well the friend of a friend wondered if I would continue spinning even though Central Snark is sort of on hiatus so I said sure in as noncommital a tone as I could muster politely. Actually, I do love checking out new music and mostly get the opportunity to do so on my commutes to work.

So as not to trifle with tradition, I shall continue my spins right here on Simply Said. After all, it's nice to have a little music to chill out with on the weekends.

Today, we have Rilo Kiley whose catchy tunes have been bouncing around in my head for a while. As you can read in the above Wiki link, two of the band members were former child stars of shows that I have no knowledge of which means I'm too old to remember or too above it to have watched (that's my too old bitter side talking).

If you like them, check out a little more over at rilokiley.com. This is the video for their song Silver Lining from their latest album, Under the Blacklight. Enjoy!

Have a great weekend and for old time's sake, drop over to Humor-blogs.com where old habits die hard.
Posted by G at 1:03 PM 6 comments:

A Few of My Favorite Things...

Laughter. Or laughing so hard with my kids - true belly laughs that tears are forming. It certainly beats the alternative of tears forming from being unable to get the creative juices flowing for a homework assignment. One silly thing lead to the next tonight (as is often the case) and to coax an assignment out of Tali, I pretend that I am a newspaper editor of the cigar chomping variety and Tali is a reporter who is not getting the assignment. Along comes Julian to totally save the day! He starts reporting on something as I scribble madly into my "notepad". I tell Tali that it is not unlike the movie, Being There where Chance becomes Chauncey and his predictions for his garden become an economic forecast. I never tire of this scene:

Not only does Julian get the job, but is ushered off to bed so that he can rest up for his next big assignment, without ever having to reveal his source. And as I said to Tali "get some rest kid, maybe that'll help you get the next big story."

Julian asks as I lead him in to bed, "What is this game?" to which I reply "We'll call it - reporter."

Tali got the assignment done. We all laughed and I even got to post a little something. I'm a bit rusty and didn't know what to blog about, so nothing like the present.

Won't somebody please save me...

from my boring template!!!

It's no secret, even to the casual observer, that I am completely maladroit at any sort of technical upgrades to my blog - short of simply adjusting the color background, that is. I go from blog to blog, admiring the beautiful window candy, witty pictures and then come back here and want to throw a brick through my blog's window.

Won't someone help me please? We could have a contest in which I could award a prize to the template designer (no professionals need apply/just saavy blogger friends). I'm thinking this THING might be just the giveaway. What? I'll have you know that is a work of art! Okay, okay - I'll rummage about a bit more.


Give it some thought. If you want to charge your friend, just do so at a deep discount. Of course, being the control freak that I am (in a nice knowing what I like sort of way), I'd have to have complete editorial imput (in a polite yet determined manner). I work well with others, especially in light of keeping up with my daily dosage of meds.

Please know that I am only half kidding and half desperate here. Any advice is appreciated, say even how to make a blog banner on my own. Should I learn Photoshop or would that be another exercise in futility? I know that I may just have to pony up some do re mi to get the look I want. Or I could just quit blogging and stop wasting my time.

Parenting Inspiration Can be found... 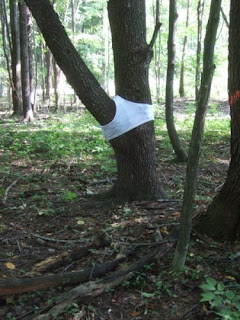 I wish that I knew which blog I had originally seen this image on to give the proper credit. If it comes to me, I shall. This is by an artist Carol Hummel who among other things, has taken to shodding trees in underpants. She explains it a bit more poetically, "Dirt Divers” are a series of work that personifies trees highlighting human intrusion on natural objects. Instead of protection and care, this intrusion has the human element burying its head in the sand in denial of its impact. It raises questions about where human intrusion is appropriate when inflicted on our environment."

This brings me full circle to Julian who is (dependent upon which side of the wet pants you are on) having many accidents or "intentionals" may more accurately describe what's going on. This occurs mostly at school, but also at home. I do believe he is trying to tell us precisely what the artist has stated above but as relates to him, "It raises questions about where adult intrusion is appropriate when inflicted on my environment."

Sometimes I think I'm the only one who understands my child. People say that they do, but then do the damndest things to convey it. Meanwhile, Julian has it all figured out and is testing people like mad. So far they're not passing with flying colors.

Julian is patiently waiting for us to catch up before he goes on to the next lesson.
Posted by G at 2:20 AM 19 comments:

Get out and vote!

Tali's assignment tonight was to write about whom she thought should be president. Her short essay is over at Muffinland.

It's Good to be a New York fan tonight -

especially for us casual observers.

No matter your level of sports observance - in my case my knowledge of Michael Strahan of the NY Giants was limited to his divorce battle played out quite publicly in PageSix of the NY Post. This is not important. You can catch up quickly and by that I mean, during the "big game" if need be. Oh this being a sports fan is not for the faint of heart. I really do feel for those fans who watch their teams throughout the regular season because I am not there with you rooting through the good times and bad. No, I am there when it gets interesting. I mean, who would want to be a New England fan tonight - a perfect season ending like this? Oy, that's got to hurt.

I do enjoy sports in what could be considered a bandwagon jumping sort of way, but truly it is just that I reserve my rooting for the final moments of a season - Super Bowls, World Series, Stanley Cups and so forth. I've rooted NY teams through all of them: '77 Yankees - I was there (mostly to hear Phil Risuto kvell "look at Reggie!"; 86 Mets - through all seven games; 91 Giants squeeker over the Bills, front and center; 94 Rangers - didn't everyone watch? In some ways, being this type of fan is even tougher as you have no idea of the stats, you just want to see your hometown team win. To clear the air - I am a NY Mets fan if push comes to shove (as it often does on the 7 train to Shea).

Of course, my personal fave of the game was the Tom Petty and the Heartbreakers halftime show. I was a teenager when their seminal debut album hit the charts, so during the halftime show the kids and I rocked out. Scissors had taken his award winning chile over to his friend's where men could be men and watch sports undistracted.

Well, I'm sure except for that Victoria's Secret commercial.

So here's to you sports fans - the old and the new (or temporary). It's not whether you win or lose - well, actually from where I'm sitting it is.

Spring training must be just around the corner...
Posted by G at 2:41 AM 10 comments: 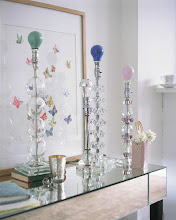